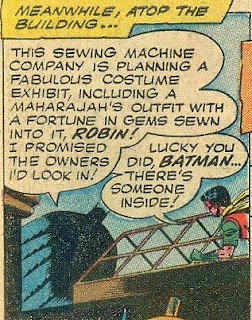 I think every story ought to have a Maharajah's outfit in it. Know why? Because it's fun to say "Maharajah."

Ruh-roh! It's another over-sized object! Apparently at Gotham City University, they never taught their engineers the difference between "inches" and "feet" as units of measurement: 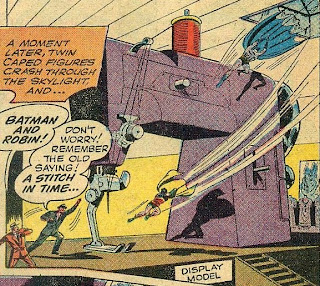 On the one hand, I'm disgusted that we've resorted to yet another gargantuan object as a plot device. On the other hand, I find it hilarious that someone felt the need to label it "Display Model." Well, it's a good thing someone said something, because I was fixin' to start doin' some quiltin' on that 6 story tall sewin' machine!

You know, if there's a needle the size of a whaling harpoon hanging from machinery of any kind, you might want to consider going around it, as opposed to swinging right under it. You're just asking for trouble. 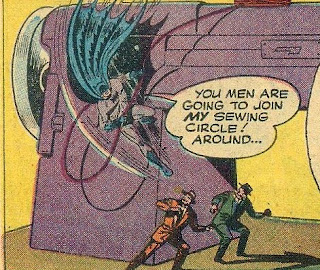 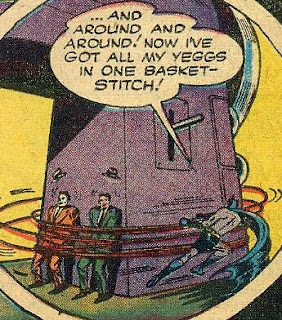 I have no idea what Batman just said there. I can't tell if it's some sewing reference, or if it's some 1950's thing, or a combination thereof. I just know that he made some kind of joke, and I don't know what it was. It is neat the way he got their hats to just kind of float in the air like that, so that's something.

See you Monday!
Posted by Adam Barnett at 12:41 AM

“Yeggs” = mid-20th-century slangs for men, particularly those of the underworld; popular in Damon Runyon stories.

“Basket-stitch” = type of knitting stitch that produces the look of a woven basket.

“All my yeggs in one basket stitch” = Batman is really, really reaching for the joke. He should go back to letting the kid handle the humor.

Seriously, why are those guys just standing there letting Batman do whatever? Or did the writers forget that Batman doesn't have super-speed again?