I've been a little remiss in not mentioning the Human Target series, which begins its regular time on Fox Network tonight. I hate to get all comic book nerdy, and goodness knows I am willing to turn a blind eye to a lot of inconsistencies when comics are brought to life, but in this version, Christopher Chance never actually assumes the identity of his client. I mean, that's kind of the whole point, isn't it? You aren't really a "Human Target" if you are just there as security detail. At best, you might become a human shield.

That notwithstanding, I'm hoping it's a decent show. I just don't think it will be as true to the source as the awesomeness that was Rick Springfield in the same role for seven episodes in 1992:


That's right. Can you believe the Human Target has had not one, but two television series already? I like the character okay, but the mind boggles. 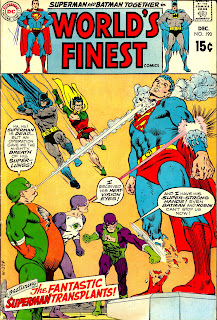 It was a two-parter, which meant it was a big deal. Back in the day, most stories were one issue long, so a story with two parts was something of an event. When a story went to three parts, we would talk about it for years later. Remember, this was before we even had Pong or cable television, so we were pretty easily dazzled.

Anyway, Superman's corpse is found dead, so naturally we chop 'im up:

Isn't that censorship panel awesome? I thought it was. Stick it to the Man!

Anyway, some bad guys buy the organs and get them transplanted into themselves, which gives them super-powers. This includes the eyes, the ears, the lungs, and the hands. And no, Clark's penis wasn't up for grabs. I know you were thinking it. Don't act like you weren't.

Anyway, in a moment of writing brilliance, the bad guys are taken down when their bodies reject the organs: 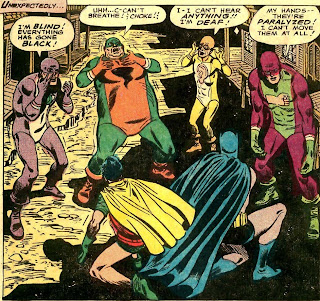 I'm not even going to pretend that wasn't an awesome plot twist, because it was.

Oh, sorry.... Spoiler Alert! Just in case that 40 year old comic was still in your "haven't read yet" pile.

Why, Lee, you sexy beast! Don't you be strutting your stuff like that in front of your lonely uncle in those tight fittin' jeans!

And into the Character Hall of Fame goes..... 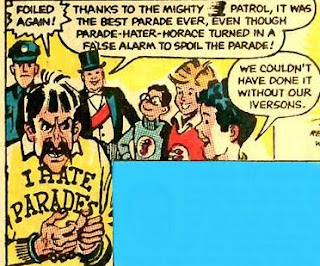 Parade-Hater-Horace, for his name and that awesome shirt.

I know.... some days, you sit down to blog and this is what you come up with.

See you tomorrow!
Posted by Adam Barnett at 5:07 PM

So...was the Superman death part of an imaginary story or was the some bizarre explanation that brought him back to life? I gots to know.

Clark's penis. Yeah, I was thinking about it. And I was imagining what my costume would look like if I had received it, too!!! :)

I love that the guy's able to smash a statue because he got Superman's super-strong hands...never mind that it would take ARM strength to throw a punch that hard. If you had super-strength in your hands alone, you'd have a pretty impressive grip, but that's all.

I'm curious as to how we're supposed to pronounce that odd symbol in the last panel.

"The parade was saved, thanks to the mighty Splodge Patrol!"

It would have been a cool twist if "Parade Hater Horace" worked at Macy's or something.