Get Your Clothes On and Let's Get Started Friday!

Some easy pickins and cringe-worthy moments to get us to the weekend from Young Allies #3 and 4!: 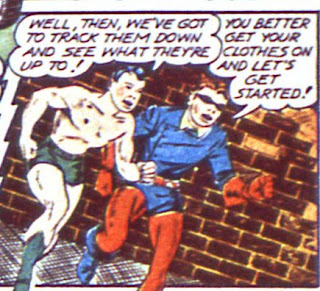 "Put on your clothes, Toro!" I'm surprised Toro doesn't hear that more often, to tell you the truth. 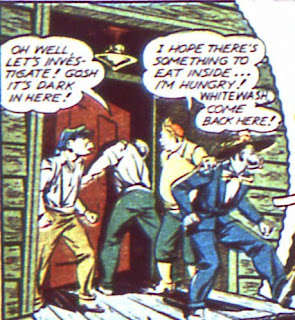 We are given a peak into the dreams of the team, which tells us a lot about them. As you can see, Bucky and Knuckles dream about punching guys out, Toro dreams about burning a human being from behind, and Jeff dreams about computers: 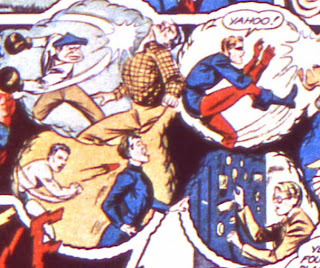 Note that not one of them dreams about a woman. Not one.

And Tubby dreams of food: 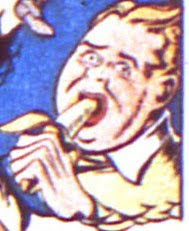 Because that's what overweight people do. When we aren't eating food, we're dreaming about it. Frankly, I'm surprised Stan Lee thought Tubby would be dreaming about something as healthy as a banana.

And Whitewash dreams of watermelon: 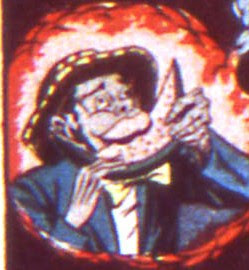 Oh, Stan. I try to see the positives in things, and Whitewash had his positive moments, but you sure can't ignore things like that. Or this: 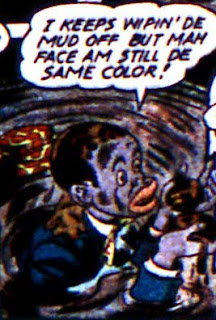 Oh, and don't forget to take a cheap shot at the fat guy: 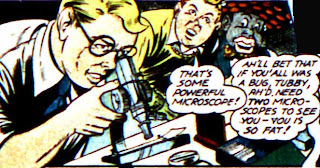 Wasn't that hilarious? Because you know, fat people never hear witty remarks about their size, so be sure to chime in whenever you get the opportunity. They will be quite impressed with your creativity and originality.

See you Monday!
Posted by Adam Barnett at 1:05 PM

I can't even tell what Whitewash is trying to say there. Wouldn't his size make him easier to see if he was a bug?

Also, gotta love the looks of panic/ecstasy on Tubby and Whitewash's faces in their dreams.

Are you sure that's a banana Tubby's eating?

Tubby is giving me nightmares already!

Sometimes a banana is just a banana.

But with Tubby, yeah, it's probably a penis.

I think you're being too hard on the boys. It is possible that Bucky is dreaming of kicking a woman.

So with your archaeological work here, how long before we can expect popularity levels to rise high enough to end up with some busts or 'Marvel Legends' figures of ol' Tubby and Whitewash? :)

I'm still trying to convince people that 'some pumpkins' is a good phrase. :D