The Justice Society goes into the distant future, where one startling fact is uncovered: 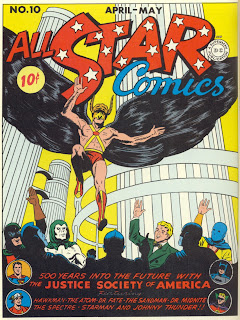 What is it about future fashions that make us not want to wear pants? Is it really good climate control, or what?

Oh, and see Superman and Batman and Flash and Green Lantern on the cover? Still nowhere inside, but buy it anyway, kids! 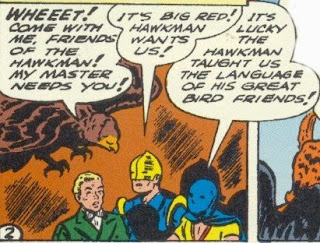 From All-Star #11. The Justice Society, in response to the Pearl Harbor bombing and the United States' subsequent entry into WWII, becomes The Justice Batallion.

Sandman's new costume totally sucked, although his singing voice got better without the gas mask: 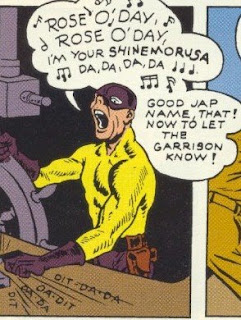 That notwithstanding, you still wouldn't cross swords with the Sandman, because he would jack you up:

Okay, I don't really understand the meme thing, but here are my favorite blog posts. I couldn't settle on just one:


Enjoy! See you tomorrow!
Posted by Adam Barnett at 11:23 AM

Sandman's singing voice may have gotten better but his racism still sucks.

Loved the post about the sushi contest. Has anyone seen my ass? I seem to have laughed it completely off!

wow.
Singing sandman is now officially the freakiest comic panel I have ever seen.

it even beats this one
http://img185.imageshack.us/img185/749/singingbatmanyg6.jpg

What IS it about Hawkman? You'd think that running around all bare-chested and pantsless, he'd be a woman's dream, but he always looks kind've hairy and smelly.

I'm with Evil Twin. That panel is pure gold. I'm left without anything clever to say.

SallyP, have you ever been up close to a hawk? They're a bit dirty and usually smell like whatever they just killed. I can only assume Hawkman would smell like dead voles all the time.

I literally cannot stop laughing right now. This is too damn funny!!